The members of the Yemeni government’s newly formed Cabinet, including Prime Minister Maeen Abdulmalik Saeed, were greeted with a loud explosion soon after its plane landed Wednesday in the city of Aden, in what an official is calling a “cowardly terrorist attack carried out by the Iranian-backed Houthi militia.”

Mohammed al-Roubid, deputy head of Aden’s health office, told the Associated Press that at least 16 people were killed in the explosion and 60 were wounded. A local security source said to Reuters that three mortar shells struck the airport’s terminal.

“It would have been a disaster if the plane was bombed,” Yemeni Communication Minister Naguib al-Awg added. 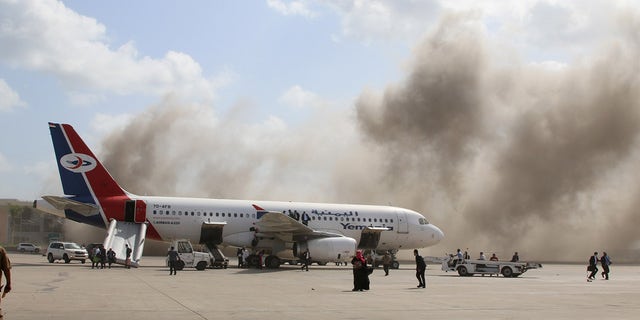 Dust rises after explosions hit Aden airport upon the arrival of the newly-formed Yemeni government, on Dec. 30. (Reuters)
(Reuters)

Yemeni Prime Minister Maeen Abdulmalik Saeed and others onboard the plane were quickly whisked away from the airport to the Mashiq Palace in the city.

Video of the incident broadcast on a television channel began with a loud blast as people were exiting a plane, prompting onlookers to start running. Smoke then could be seen billowing out of the airport’s terminal building, followed by the sounds of gunfire. Then the feed is cut off.

Images also shared on social media from the scene showed rubble and broken glass strewn about near the airport building and at least two lifeless bodies, one of them charred, lying on the ground. In another image, a man was trying to help another man whose clothes were torn to get up from the ground. 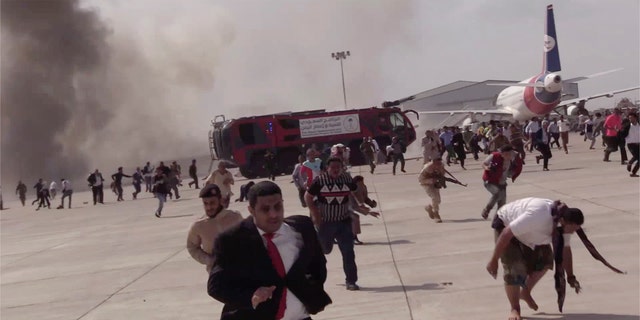 People run following the explosion at Aden airport. At least 16 have been reported dead. (AP)

“We assure the people of our great people that all members of the government are fine, and we affirm that the cowardly terrorist attack carried out by the Iranian-backed Houthi militia against Aden airport will not deter us from carrying out our patriotic duty and that our blood and soul will not be more precious than the blood of Yemenis,” Muammar Al-Eryani, its Minister of Information, Culture and Tourism, wrote in a tweet.

“We have mercy on the souls of the martyrs, and we wish the injured a speedy recovery,” he added.

The government of Saudi-backed Yemeni President Abed Rabbo Mansour Hadi is at war with Iran-allied Houthi rebels, who control most of northern Yemen as well as the country’s capital, Sanaa. 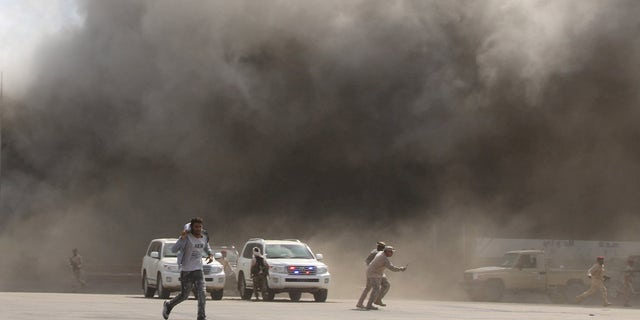 Dust rises after the explosion rocked the airport.
(Reuters)

Last year, the Houthis fired a missile at a military parade of newly graduated fighters of a militia loyal to the United Arab Emirates at a military base in Aden, killing dozens.

According to one Yemeni security official, three Red Cross workers were among the wounded in Wednesday’s attack, though it was not clear if they were Yemenis or of other nationalities.

The U.N. special envoy for Yemen, Martin Griffiths, condemned the explosion as an “unacceptable act of violence.” He said in a tweet that it was “a tragic reminder of the importance of bringing #Yemen urgently back on the path towards peace.”

The delegation was returning to Aden after being sworn in last week as part of a reshuffle following a deal with rival southern separatists backed by the UAE. Yemen’s internationally recognized government has worked mostly from self-imposed exile in the Saudi capital of Riyadh during the country’s years-long civil war.

President Hadi, in exile in Saudi Arabia, had announced a Cabinet reshuffle earlier this month.

The reshuffle was seen as a major step toward closing a dangerous rift between his government and the southern separatists.

The Associated Press contributed to this report.