China’s latest crackdown comments on bitcoin mining and trading have sparked some fear among local traders and miners as USDT has experienced notable sell-off against the Chinese yuan since the news dropped.

China’s State Council, the country’s central government body, published the minutes of a May 21 meeting hosted by its Financial Stability Development Committee at 10:00 pm on Friday China time. The meeting made comments on “cracking down on bitcoin mining and trading activities” as part of the committee’s efforts of preventing financial risks.

This is the first known instance where the comments specifically on bitcoin mining and trading were brought up at a State Council committee meeting as a high-level signal. It remains to be seen whether or how this top comment will be executed and to what extent. But it appears the news has already spooked local investors.

In the hour after 10:00 pm local time, HT, OKB and BNB, the exchange token of Huobi, OKEx and Binance, which cater to China-based crypto traders, fell by 17%, 19% and 10%, respectively. The plunge further extended in the following days. Meanwhile, BTC and ETH dropped by around 10% shortly after the news broke but have since then bounced back to around $37,000 and $2,300, respectively.

That means local traders, including miners, are seeing an increasing volume of orders to liquidate their USDT into Chinese yuan through OTC desks amid the uncertainty cast by the State Council meeting comments.

Dovey Wan, founding partner at Primitive Ventures, said on Twitter that she “knew a few big miners already cashed out in last 6 hours since the news is out, sold relentlessly and grabbed all possible channels for fiat off ramp.”

Real-time quotes for 1 USDT by OTC desks on Huobi, OKEx and Binance are right now at 6.33 yuan but it went down from above 6.5 yuan before the news to as low as 6.2 yuan around Saturday midnight China time. Currently, the foreign exchange rate for 1 USD is around 6.44 yuan.

Meanwhile, blockchain data shows that the realtime hash rate connected to major bitcoin mining pools have seen some small-to-moderate declines over the 24 hours since the news dropped. Huobi’s bitcoin mining pool, however, has seen a whopping 29% slide over the past 24 hours. Overall, there has been a significant drop of bitcoin’s hash rate since the past week due to that power stations in China’s Sichuan were facing energy limitation. 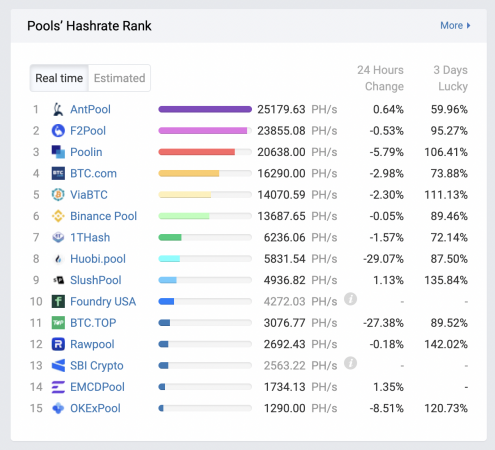 The Thursday meeting is a regular meet-up of the Financial Stability Development Committee to discuss their high-level priorities in the financial space and it was led by China’s vice premier Liu He, who is considered as a right-hand man to Chinese President Xi Jinping. Liu was also known for leading the group of Chinese delegates during the trade talks with the Trump administration over the years.

Based on the meeting notes, the Committee laid out three areas of focus: “make sure the financial industry better serves the economy,” “commit to preventing financial risks,” and “continue to deepen the reformation.”

Apart from cracking down on bitcoin mining and trading activities, the “preventing financial risks” part mentioned other priorities such as reducing credit risks, enforcing regulation on companies’ financing activities, maintaining the stability of the stock, debt, and foreign exchange markets, among others.

The comments made in the meeting don’t constitute a formal ordinance or regulation. For them to be executed, there needs to be more concrete rules in terms of which government agency will be taking the lead in the execution. For instance, in September 2017, it was the People’s Bank of China along with six other government ministries that issued the ban on initial coin offerings and fiat-to-crypto trading.

But the comments on bitcoin mining come at a time when China is stepping up efforts on achieving the carbon neutrality mission which was pledged by Xi in his recent remarks.

It was under this backdrop that a group of scholars from Chinese universities published a research paper on the Nature Communications that claimed bitcoin mining will be a serious threat to China’s carbon neutrality mission if without proper policy intervention, although the paper was based on a misleading, if not inaccurate, assumption.

The Inner Mongolia government has already taken a series of measures to drive out bitcoin mining operations in the region, where the energy is mostly coal-based. It set up dedicated email and mail addresses and a hotline this week for the general public to snitch on the whereabouts of any active bitcoin mining farms.

That said, if the high level comments on cracking down bitcoin mining activities are getting executed in the months to come, it could accelerate the global decentralization of bitcoin’s hash rate out of China, where the computing power dominance is already fading away.

As of press time, no major bitcoin mining operations inside China, except B.Top, a joint mining and equipment brokerage service under China-based mining pool BTC.top, have publicly made any immediate business changes while taking a wait-and-see approach.

Jiang Zhuo’er, the founder and CEO of BTC.top, said on Weibo early Saturday local time that his b.top business will discontinue serving customers who are based in mainland China.

“B.TOP has not received any regulatory requirement from related government agencies. But considering the latest regulatory signal and that B.TOP’s business from inside mainland China accounts for a small part of our proprietary mining business, there’s no need to continue offering miner brokerage service for mainland Chinese consumers and to take on extra regulatory risks,” Jiang wrote.

© 2021 The Block Crypto, Inc. All Rights Reserved. This article is provided for informational purposes only. It is not offered or intended to be used as legal, tax, investment, financial, or other advice.