The last meaningful throw in the cold and the rain of MetLife Stadium ultimately ended the season for the Cowboys on Sunday afternoon.

Dallas was playing for a postseason spot, a position it didn’t deserve but was eligible for because of how poor the NFC East has been in 2020.

Quarterback Andy Dalton, playing with a bloody left hand covered by a glove, was trying to avoid a sack late in the fourth quarter against the Giants. But Dalton’s pass, on a third and goal from the Giants 17, was intercepted by Xavier McKinney in the end zone.

And with that, the slim playoff hopes for the Cowboys ended with a 23-19 loss to the Giants. The season is over now. The Cowboys will worry about the NFL draft, instead of a possible home playoff game. It was a poor start by the Cowboys on Sunday and a frantic finish. The Giants will now wait for Sunday night’s clash between Washington and Philadelphia to decide if they reach the postseason.

Here are five takeaways from Cowboys-Giants:

No challenge by McCarthy

You can go back and look at several plays in an NFL game and think those decided it. But Dante Pettis’ 10-yard reception on a third and 16 halfway through the fourth quarter set up a 50-yard field goal by Giants kicker Graham Gano.

The question is whether Pettis made a diving catch. It appeared Pettis trapped the ball, but the referees ruled it a catch on the field. Cowboys coach Mike McCarthy didn’t challenge the play. He kept looking at the video replay board and just watched the opportunity go by. In a season of gambles by McCarthy, especially on fake punts, this was a situation in which he should have gambled.

Gano made the field goal with 6:27 left, forcing the Cowboys to need a touchdown on their final drive. McCarthy’s inaction hurt his team.

The fumble that was … or wasn’t?

As the Giants were running out the clock, running back Walter Gallman Jr. broke free from linebacker Jaylon Smith for a big gain. But Gallman fumbled the ball in the wet weather and a wild scene occurred. Bodies were everywhere and Gallman was ruled to have recovered the fumble. Or did he?

A replay showed him sitting on the loose ball. Another replay showed him with the ball in his arms as he lay on the ground. The Cowboys swore they recovered the ball, and referees at different points awarded possession to both sides before ultimately deciding the ball belonged to New York.

It looked like the refs got this one right. Did they?

On Saturday night, the Cowboys signed offensive coordinator Kellen Moore to a three-year contract extension. After the poor first half by his offense, there were questions about why Dallas would do so. But Moore redeemed himself in the second half as the Cowboys offense took the game over.

Keeping Moore is another example of how much the Cowboys’ front office values him, including coach Mike McCarthy. The future looks good with Moore if some of the offensive pieces — Dak Prescott, La’el Collins, Blake Jarwin and Tyron Smith — can return in 2021 from injuries.

“I think the obvious continuity, consistency and just the opportunity to really grow and that’s all the way through,” McCarthy said on 105.3 The Fan [KRLD-FM] before the game.

“Grow with him as a play-caller and grow this system of offense we’ve put together and get all our players back healthy and build off what we’re accomplishing for the next couple of weeks here for this season. We’re off to a good start and we have a really good foundation on offense and we just want to keep building.”

In the last four games, the Cowboys defense converted 12 takeaways into 57 points. Donovan Wilson had an interception and Chidobe Awuzie recovered a fumble in Sunday’s game.

It’s amazing how differently this team played when it forced turnovers. One of the biggest things the Cowboys have been worried about in drafting or signing players in free agency is making sure they have playmakers. Do the Cowboys have some now on defense? It’s clear Wilson — he had a pick and a sack Sunday — and rookie corner Trevon Diggs, with three picks this season, have played well. Moving forward, worrying about creating turnovers is something that shouldn’t be a concern.

A first half to forget

In the first half, the Cowboys acted like they had nothing to play for. They went 1-7 on third downs. Ezekiel Elliott rushed for 27 yards and left the game with an apparent leg injury. Andy Dalton was sacked three times and played as if he was still on the woeful Bengals.

And, yes, the Cowboys had five penalties for 48 yards, including a bad one on cornerback Jourdan Lewis who hit a Giants tight end in the chin behind a play and a false start on guard Connor McGovern as the Cowboys were trying to spike the ball before halftime. Linebacker Jaylon Smith was flagged for holding while breaking up a pass play and started to immediately celebrate, thinking he wasn’t penalized. 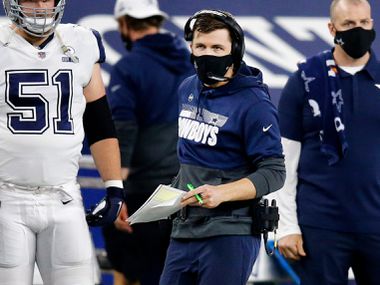